Bogotá-based RenoVatio on Wednesday launched Colombia’s first auction for power purchase agreements from renewable sources. BNamericas spoke to the company’s general manager, Francisco Sanclemente, about some of the key aspects of the initiative.

BNamericas: How is the auction shaping up?

Sanclemente: We’re in the dark because it’s the first time this has been done, but so far we’ve been getting a lot of attention, much more than we expected. I’m surprised at how many people are interested in the auction, which proves that the market needed it. It’s very hard for a generator to sign a PPA [power purchase agreement]. There are more than 100 generation projects with approved connections that have, until now, only had one chance to purchase long-term energy. That was the auction in October 2019 [coordinated by the government for long-term PPAs]. And even then, only nine projects were awarded contracts.

BNamericas: When will the contracts begin?

Sanclemente: The contracts are expected to be signed in the first week of February. The project developers will tell us when their COD [commercial operation date] is and they have a window to begin between 2022 and 2025. It’s up to the generator to decide. If we set the same COD for everybody, they will commit to that, but there are sure to be delays. We need to sell that energy so we prefer to have that certainty. We’d rather tell them, ‘Look, don’t rush, just tell us when you’re ready to dispatch that energy’. If it’s July, 2024, so be it.

BNamericas: Could this become a regular event? And do you expect other private traders and suppliers to stage similar auctions in the future?

Sanclemente: I guess it depends on how well we do. I’d imagine that if we are successful and obtain good prices that a lot of people will copy us. But whether or not others will be able to offer the same kind of flexibility, I’m not sure they will be ready for that.

BNamericas: Speaking of flexibility, what will be the length of the contracts?

Sanclemente: They can range from five to 25 years. That’s pretty unique. Contracts of that length are a very attractive proposition to most generators.

BNamericas: How is RenoVatio able to offer this type of flexibility?

Sanclemente: In order to be flexible we need to have a clear strategy. We went for a size [20MWh a month] that we already manage on a day-to-day basis and provide to our final users. If you look at wholesale contracts that we were transacting last year, we were completing transactions larger than that amount. So we already move above those ranges.

BNamericas: The difference this time being that generators have greater choice and that the competition will lead to lower prices for RenoVatio, correct?

Sanclemente: That’s the idea. After the October auction, the government didn’t provide any signals about future opportunities. Generators have struggled to find buyers that will sign long-term contracts for their energy. Until now the mentality in Colombia – at least energy-wise – has been short-term. Our research shows that in 104 tender processes [for wholesale energy] that were opened between mid-2018 and August 2018, 66% of them have terms of two years or less and only 12% were agreements lasting more than five years. When you look at those figures, you see that they must be struggling to find users. We’re not doing this because we’re nice. We see it as a business opportunity and we think it will be a win-win for everybody. We saw at least year’s auction that renewables can be competitive.

BNamericas: What has the reaction been from possible participants? Could you tell us how many generators have shown interest in the auction so far?

Sanclemente: There are more than 10 already. It’s attracted a lot of interest from investors, especially in European countries such as Belgium, the UK, Spain and Germany. In fact, [investment promotion agency] ProColombia has asked us if we can organize a separate event for their foreign investors on November 11 to explain the details of the auction to them.

BNamericas: Are any of these investors proposing new projects from scratch?

Sanclemente: Participants in the auction need to have an approved connection to the system. Investors would need more than a couple of months to get that for a new project. But investors who perhaps saw that things weren’t moving in Colombia’s renewables arena a few years ago are now wanting to take another look to see what will happen. Most of the investors in Colombia’s renewable energy projects are foreign and many of those are European.

There are already enough projects with approved connections to guarantee substantial new energy capacity. The problem is they can’t sell the energy. If you can’t secure a PPA, projects aren’t attractive for investors and they’re not attractive for banks. So first you need to have a connection and then you need to make that financially viable. If nobody is able to buy [electricity] through long-term PPAs, that energy won’t be viable. That’s been the problem in Colombia. The available connections have all been taken, in many cases by projects that will never be built. For that reason the regulator is looking at clearing the bottlenecks.

BNamericas: Can renewable projects be profitable if they sell exclusively on the spot market?

Sanclemente: The spot market is incredibly volatile. In any given week there could be 90% price volatility. In the space of a couple of months, prices can rise three or four times. That’s crazy. It’s impossible to have price certainty – even in periods of less than 60 days – because nobody knows if it’s going to rain or not. Second, I don’t think banks have the appetite to support projects that don’t have long-term contracts in place.

This year has been particularly volatile because the beginning of the year started with high spot market prices, mainly because it hadn’t rained since November. Then came Covid and we had some of the strictest lockdowns in the region which saw demand fall by 15-20% for several months. If it weren’t for those lockdowns I think we would’ve had [a power supply deficit] this year.

BNamericas: How else will this auction differ from the public one held in October 2019? Could you give us any more information about the likely profile of the participants?

Sanclemente: Around 80% of the projects that were assigned projects in the October 2019 auction were wind projects in La Guajira that are larger than 150MW and 200MW. Perhaps our auction is designed more for medium-sized projects. For example there are many solar projects in Colombia with planned installed capacity of 19.9MW. That’s because generators of plants smaller than 20MW don’t have to pay the CERE [the cost charged to market participants to pay for the reliability charge]. That means projects of this size are more competitive, but it’s also the reason why solar hasn’t scaled up in Colombia year after year like it has in Mexico, Brazil or Chile.

BNamericas: What about likely prices in the auction?

Sanclemente: In the October 2019 auction, they were around 30% below market prices. We expect to see a continuation of that trend. 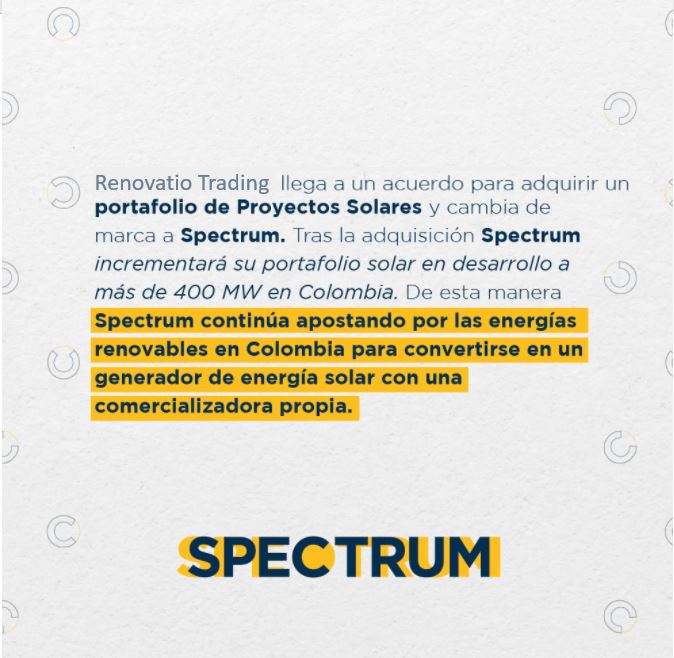